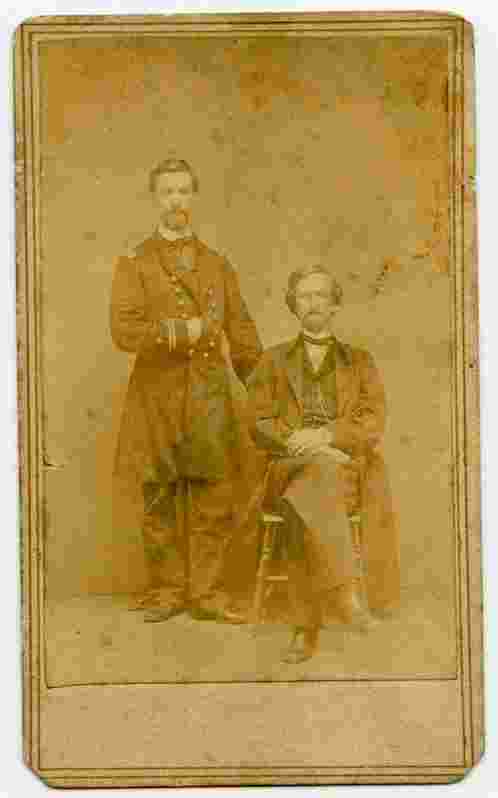 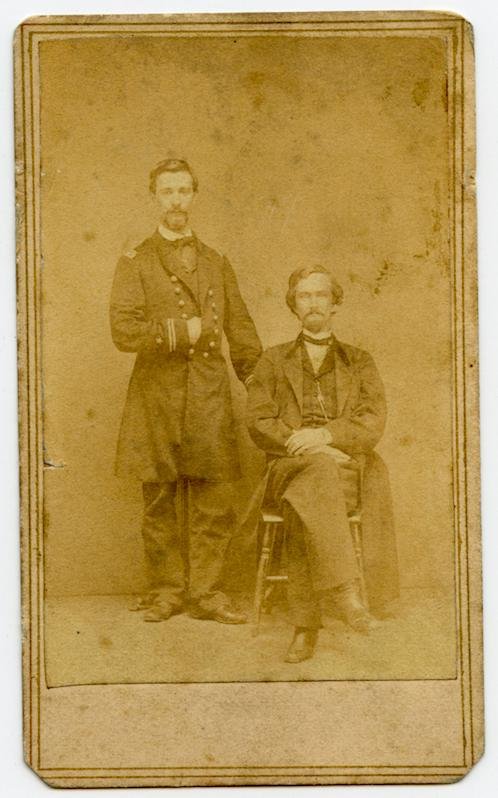 David P. Rosenmiller Jr. was born March 21, 1841 in Dayton Ohio and received his education for the most part at the schools of Lancaster, graduating from the Boys High School after which he attended Franklin and Marshall College, leaving that institution when in the junior class in order to enter the service of his country. On March 13, 1862 Mr. Rosenmiller was commissioned as fourth master in the gunboat service Mississippi squadron under First Flag Officer Foote. While on the USS Essex in 1862, he ran the batteries at Vicksburg, then proceeded down the river to New Orleans and after leave of absence during which he visited Lancaster, Pa he was promoted to the rank of ensign in the US Navy, reporting to Admiral Porter on the Flagship Black Hawk on which he served till toward the close of the war. He was then given command of the SS Alexandria, cruising on that vessel until the termination of hostilities and having almost daily encounters with the Rebels. He was honorably discharged at New Orleans Nov 5, 1865 by reason of the close of the war. Such is the record in brief of the part taken in the “War of the Rebellion” by as gallant a sailor as ever commanded a gun. As a matter of justice and a thing to be proud of, Mr Rosenmiller received a bounty of $600 from the US Government for the part he took in the affair with the Rebel ram Arkansas. After the war, he was elected to the legislature from the city district, serving two terms (1875 and 1876). He was later elected mayor of Lancaster by the Republicans serving for two years but after his retirement from the mayoralty he took no active part in politics.


On Nov. 27, 1862 Clarence Fendall reported for duty at Cairo, Illinois, and was assigned to quarters on the flagship "Blackhawk", under Rear Admiral David Dixon Porter (1813-1891). He and draughtsman, Alexander Strausz provided maps of the Yazoo River to General Sherman. This information was the preliminary means for the attack on Vicksburg. Many historians believe that the fall of Vicksburg broke the back of the Confederacy in the Mississippi Valley and ultimately led to the total breaking of the Confederacy. While conducting this survey, the Gunboat "Tyler" which accompanied them was shot at by Confederates. According to Clarence's report, he was fired at often by the enemy. At one time Clarence was about 3 miles beyond the pickets of his own forces. He was accompanied by a guard who made prisoner a rebel officer who had taken means to capture Mr. Fendall and his plane (table used for surveying). By July Fendall was found to be unfit for duty because of illness.
In a letter to Department - Admiral Porter states: "I take this opportunity to give to Mr. Fendall and Mr. Strausz, Assistants in the Coast Survey, the full credit they deserve for their indefatigable industry. Since they have been attached to the squadron they have been connected with almost every addition that has been undertaken; They have kept both Army and Navy supplied with charts when they could not otherwise be obtained; They were found ready by all times to go anywhere or do anything required of them. Whether it was on a gunboat expedition, or in the trenches before Vicksburg, engineering, when the General commanding called for volunteers from the Navy. They have added to our collection of maps many geographical corrections which are valuable, and they have proved to me that no squadron can operate effectively without a good corps. of surveyors." ("The Coast and Geodetic Survey- Its History, Activities and Organization").
Clarence was a field man and very competent technically. He took great pride in exerting himself to accomplish his work with the utmost accuracy. It appears that dissension rose between Fendall and Strausz, and their were indications that Fendall and Admiral Porter did not get along well early in their relationship. Fendall referred to Porter as “rude”, although “not so rude at present, as when I first saw him...”. Clarence was transferred to Gen. Ulysses S. Grant’s headquarters in 1863. In December of 1863 he proceeded up the Ohio River aboard the Alexandria to Cairo, Illinois. His assignment was to map the Ohio River in the Mound City, Illinois. Although away from the frontlines, and living in splendor, it was far from comfortable due to the unbearably cold weather. Clarence became sick, and left for the Washington office on May 31, 1863. He arrived in Chattanooga, Tennessee on October 29, 1863 and was involved in mapping prior to the battle of Chattanooga in December of 1863. He returned to Vicksburg, Mississippi on November 24, 1863. In 1864 he mapped the Wassaw Sound, Wilmington, and the Tybee Rivers in Georgia.
After the war he was a Sub Assistant on board the Hassler, a 61 foot schooner, named for Ferdinand Hassler (1770-1843), the first superintendent of the U.S. Coast Survey. It was while with the Coast Survey Ship at Norfolk, Virginia that "Claude", as he was known, died of Uremia, a disease he contracted during the Civil War.