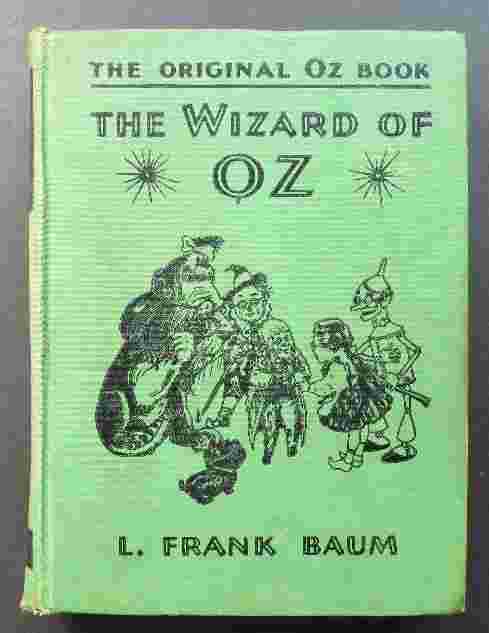 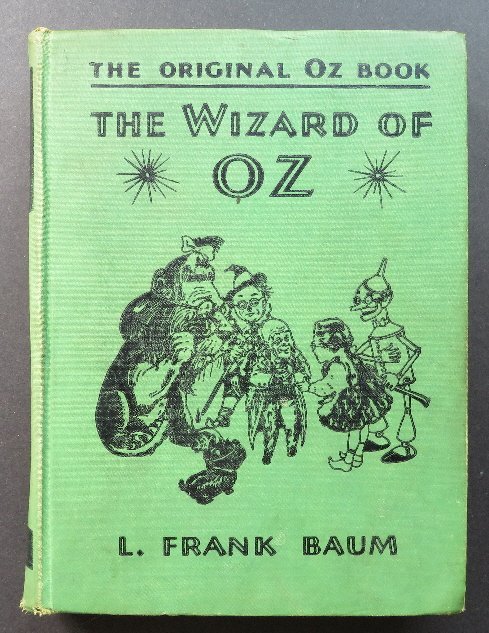 "The Wizard of Oz" - The Original Oz Book, "The New Wizard of Oz", by L. Frank Baum with pictures of W.W. Denslow, published by Bobbs-Merrill Company, first printing of the Special Movie Edition with sepia photos of the characters from the MGM 1939 film on the endpapers.

The Cyclone;
The Council with the Munchkins
How Dorothy Saved the Scarecrow
The Road through the Forest
The Rescue of the Tin Woodman
The Cowardly Lion
The Journey to the Great Oz
The Deadly Poppy Field
The Queen of the Field-Mice
The Guardian of the Gates
The Wonderful Emerald City of Oz
The Search for the Wicked Witch
The Rescue;The Winged Monkeys
The Discovery of Oz, The Terrible
The Magic Art of the Great Humbug
How the Balloon was Launched
Away to the South;Attacked by the Fighting Trees
The Dainty China Country
The Lion becomes the King of Beasts
The Country of the Quadlings
Glinda Grants Dorothy's Wish
Home Again

This is the scarce movie edition, the only edition containing the complete original text on which the famous Metro-Goldwyn-Mayer movie was based. A very nice copy of the movie edition released in conjunction with the MGM movie starring Judy Garland, Ray Bolger, Frank Morgan, Burt Larh, Jack Haley, Billy Burke, and Margaret Hamilton. 1st state printing with illustrated endpapers showing sepia stills from the movie and black bands on spine.

"Folk lore, legends, myths and fairy tales have followed childhood through the ages, for every healthy youngster has a wholesome and instinctive love for stories fantastic, marvelous and manifestly unreal. The winged fairies of Grimm and Andersen have brought more happiness to childish hearts than all other human creations.Yet the old-time fairy tale, having served for generations, may now be classed as "historical" in the children's library; for the time has come for a series of newer "wonder tales" in which the stereotyped genie, dwarf and fairy are eliminated, together with all the horrible and bloodcurdling incident devised by their authors to point a fearsome moral to each tale.

Modern education includes morality; therefore the modern child seeks only entertainment in its wonder tales and gladly dispenses with all disagreeable incident. Having this thought in mind, the story of "The Wonderful Wizard of Oz" was written solely to pleasure children today. It aspires to being a modernized fairy tale, in which the wonderment and joy are retained and the heart-aches and nightmares are left out. L. Frank Baum, Chicago, April, 1900."

William Wallace Denslow was born in Philadelphia on May 5, 1856. By the time he turned twenty, he was drawing advertising art and working for magazines and newspapers all over the country. He gained a national reputation, and set up shop in Chicago in the 1890s. There, he met L. Frank Baum, and the two helped inspire each other's creativity on a number of projects. He also did illustrations for Elbert Hubbard at his famous Roycroft Shop, and in general became one of the most well-known and prolific American artists of the turn of the century.