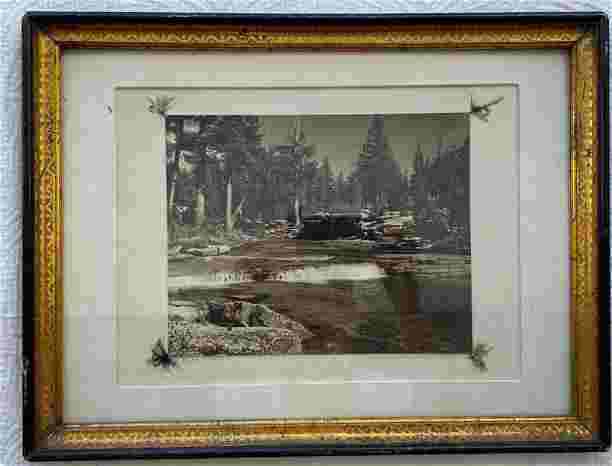 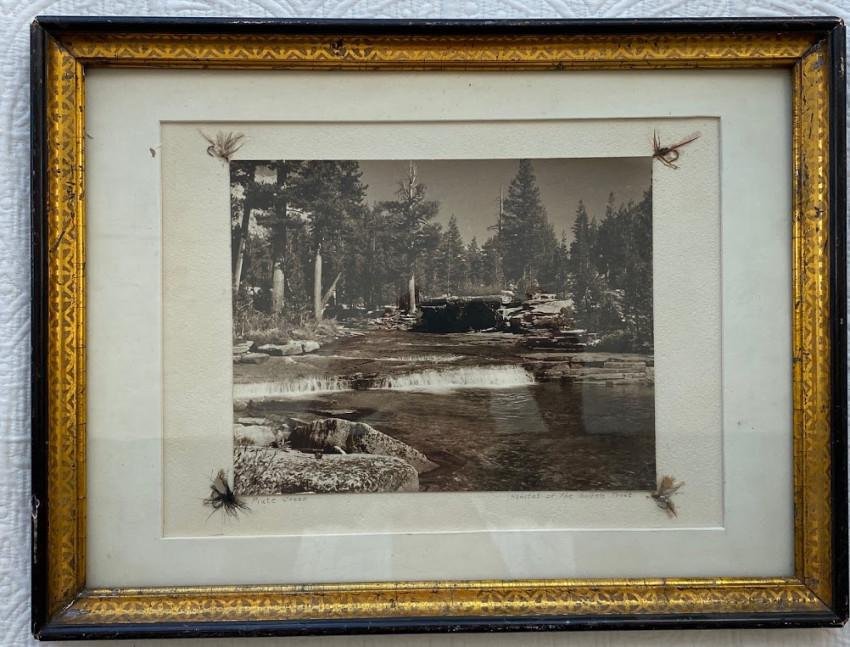 [Fly-fishing in California] a bucolic view of the Piute River, a fly-rod in the bottom left corner of the image, framed with four actual dry-fly specimens. [Undated but ?1950s]. Photo (7 1/4 x 9 1/4 in; 183 x 235mm), a mounted vintage warm-toned photograph, titled 'Piute Creek Habitat of the Golden Trout', framed and glazed. Condition: some damage to the flies and extremities of the frame, otherwise excellent.

"It is the opinion of most fishermen that the prize for striking beauty belongs to the golden trout. The catching of one’s first “goldie” is always a memorable event. The brilliant coloration of bright golden-yellow sides with reddish belly and fins is usually not apparent until the trophy is removed from the water. Dark olive bars or parr marks parallel each other vertically on both sides. The dark spots, when present, rarely extend below the midline on the sides.

Its specific scientific name, “aqua-bonita,” means “pretty waters” and is quite appropriate in describing its aquatic home. Once this beauty was found only in a few of the high mountain streams of the Kern River drainage; especially Volcano Creek (now called Golden Trout Creek) in Sequoia National Park. Many of the rocky slopes of Volcano Creek are volcanic in origin, containing bright reds and yellow-browns. This may have influenced the coloration of the golden trout in its original home.

Although native only to this limited area, it has since been widely planted throughout the High Sierra. Here in a land of long winters and a short summer growing season they are found inhabiting a number of alpine lakes and streams today. Though limited in distribution in Yosemite, headwaters of both the Tuolumne and Merced Rivers contain such waters. Golden trout were planted at Upper Fletcher Lake and Adair Lake in Yosemite National Park in 1919-1920 and in Townsley Lake in 1922 at elevations of over 10,000 feet." (https://www.yosemite.ca.us/library/fishes/golden_trout.html)

"Piute Creek is a 19-mile (31 km) long stream in northern Yosemite National Park, in Tuolumne County, California. It is a major tributary of the Tuolumne River, draining a rugged and remote area of the Sierra Nevada.The creek begins at an unnamed lake near Burro Pass and Matterhorn Peak, flowing west then southwest into Slide Canyon. Here, it briefly flows underground through a fallen talus pile known as "The Slide". Below Slide Canyon it receives Camp Creek and Rock Creek then descends steeply southwest into Benson Lake. After emerging from the southern end of the lake it flows through an area known as Pleasant Valley, where it passes the smaller Saddle Horse, Irwin Bright and Table Lakes, then drops over a long series of cascading waterfalls into the Grand Canyon of the Tuolumne. It joins with the Tuolumne River in Pate Valley, about 5 miles (8.0 km) upstream from Hetch Hetchy Reservoir. Piute Creek has also been known as Cascade Creek and Slide Creek." (wikipedia)

Lakeville, CT, USA
34 Followers
Get notifications from your favorite auctioneers.
As Seen On
Shop With Confidence
Since 2002, LiveAuctioneers has made exceptional items available for safe purchase in secure online auctions.
Popular Searches
Artists & Creators
Brands
Style Periods
Origins
Company
Winning
Selling
Â© 2002-2020 LiveAuctioneers. All Rights Reserved.Cookie PolicyTerms & ConditionsPrivacy Policy
This site is protected by reCAPTCHA and the Google Terms of Service and Privacy Policy apply.
BACK TO TOP