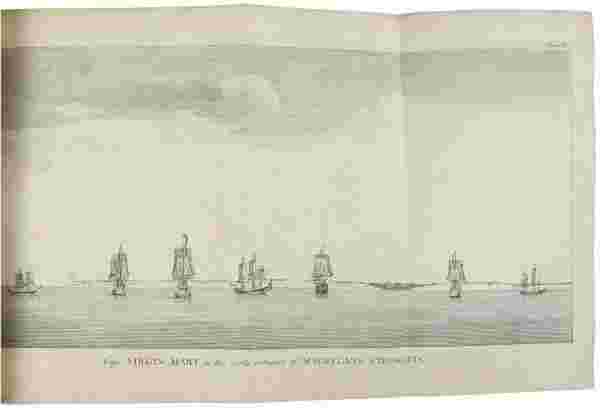 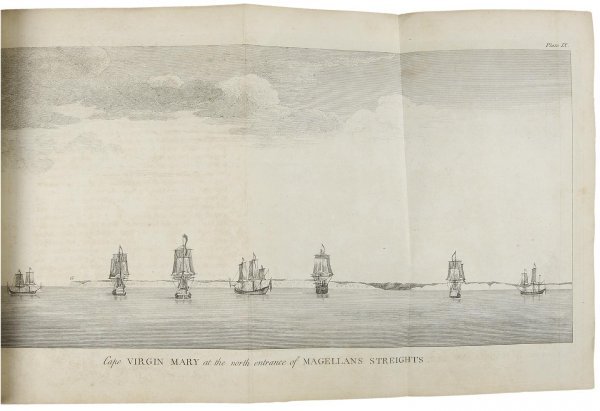 Title: A Voyage Around the World, in the Years MDCCXL, I, II, III, IV. By George Anson, Esq; Commander in Chief of a Squadron of His Majesty's Ships, sent upon an Expedition to the South-Seas.
Author: Anson, George and Richard Walter
Description: Compiled from Papers, and other Materials of the Right Honourable George Lord Anson, and published under his Direction, by Richard Walter, M.A., Chaplain of his Majesty's Ship the Centurion, in that Expedition. [34], 417, [2] pp. With 42 copper-engraved maps, charts, views, coastal profiles, etc., most folding. (4to) 10x7¾, period calf, rebacked with modern morocco, spine tooled in gilt, raised bands, new endpapers. First Edition.With manuscript orders signed by Anson, Lord Trentham, Lord Duncannon and Secretary to the Admiralty Thomas Corbett, dated 6th Dec. 1750. The orders are to a Captain Vaughan, appointing him captain of His Majesty's Sloop Peregrine, and ordering him to prepare to go to sea, "victualized with three months Provisions of all Species, except for Beer, of which she is to have as much as she can conveniently stow..." The orders are laid on paper backing, tipped to front free endpaper. This is the Royal Paper issue of the work, of which 350 copies were subscribed for, with list of subscribers' names in the preliminary matter. The account is justifiably famous for the many engraved charts and views, but also noteworthy for the text chronicling adventure and discovery as Anson roamed the Pacific in pursuit of Spanish treasure, at which he was very successful, capturing in 1743 the Manila galleon with a treasure of £400,000 sterling, returning to England a rich and famous man. Hill comments that "This compilation has long occupied a distinguished position as a masterpiece of descriptive travel. Anson's voyage appears to have been the most popular book of maritime adventure of the eighteenth century." Cox notes that four editions came out the first year of publication, with 16 by 1781. He also comments on the "famous and unfortunate" nature of the expedition, with seven of the eight ships that set out being lost rounding Cape Horn and on the coast of Chile, and more than two thirds of the 900 men that set out from England perishing. Cox Vol. I, p.49 ; Hill 1817; Sabin 101175.
Heading: zzcPlace Published: London
Publisher: Printed for the Author by John & Paul Knapton
Date Published: 1748

Crackling and aging to the covers; a few plates with marginal repairs/reinforcements, 5" repaired tear to chart of southern part of South America, repaired tear (about 7") at center of chart of the Philippines (we have never observed an example not torn at that point), several plates are ill-creased at folds, some aging within, very good or better.

3,383 Followers
Get notifications from your favorite auctioneers.
As Seen On
Shop With Confidence
Since 2002, LiveAuctioneers has made exceptional items available for safe purchase in secure online auctions.
Popular Searches
Artists & Creators
Brands
Style Periods
Origins
Company
Winning
Selling
Â© 2002-2020 LiveAuctioneers. All Rights Reserved.Cookie PolicyTerms & ConditionsPrivacy Policy
This site is protected by reCAPTCHA and the Google Terms of Service and Privacy Policy apply.
BACK TO TOP