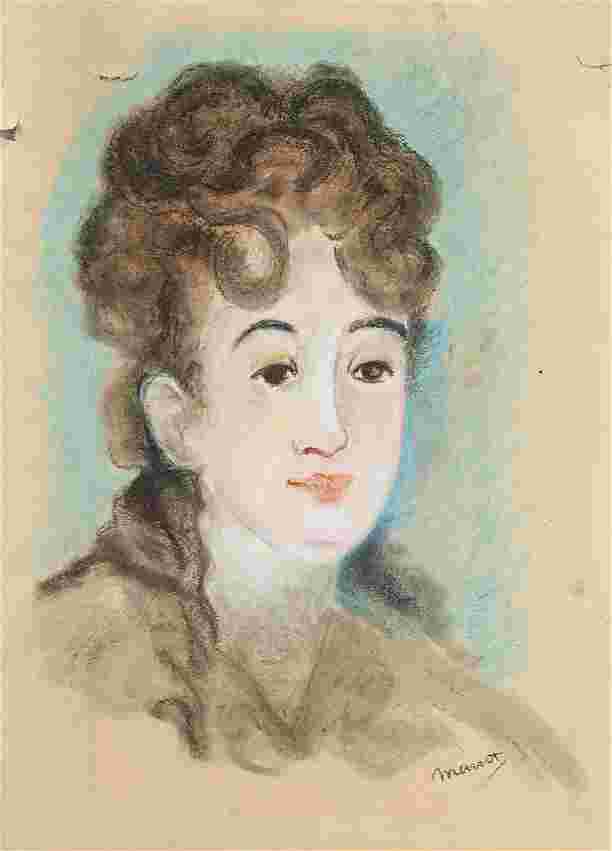 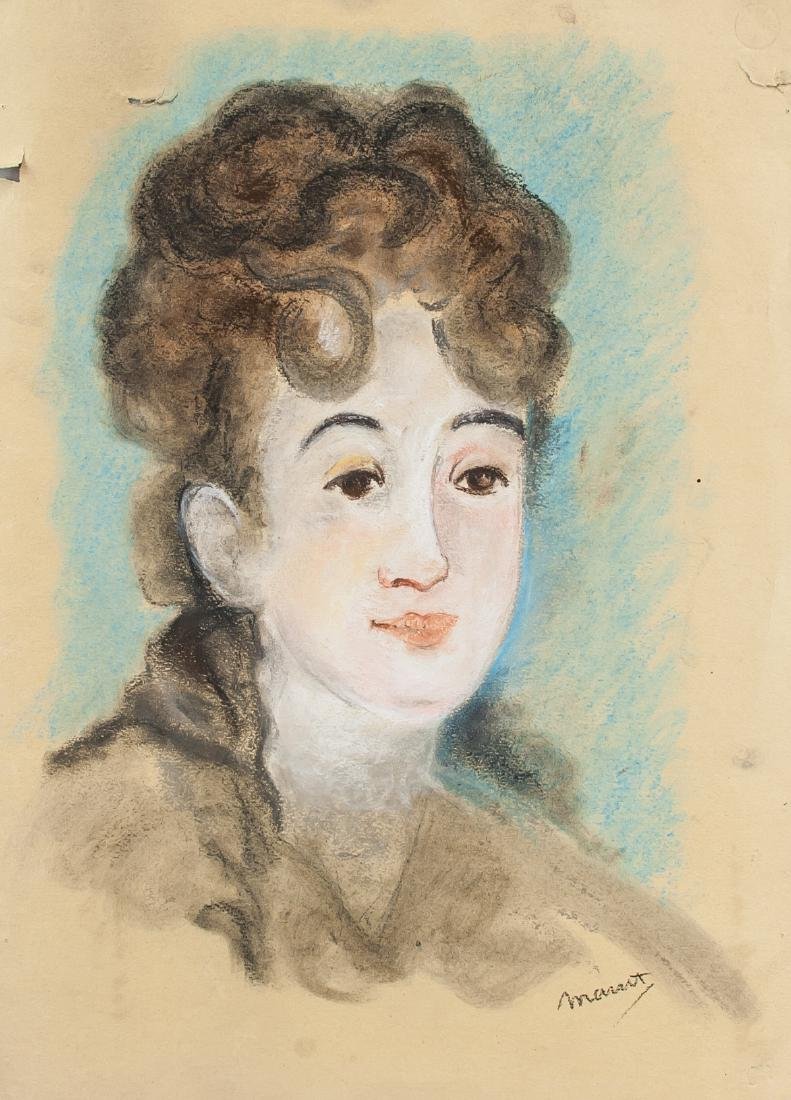 Gouache on paper. Featuring a portrait. Signed and attr. Edouard Manet (French, 1832-1883) on the lower right corner. 41.5 x 30 cm (16.3 x 11.8 inches). Edouard Manet was a French Impressionist painter who had an important impact on the course of Western art. Frontal lighting, impasto brushstrokes, and controversial depictions of nude women in contemporary settings-as seen in Olympia(1863)-are hallmarks of his work. â€œA painter can say all he wants to with fruit or flowers or even clouds,â€ he once explained. Born on January 23, 1832 in Paris, France, he grew up in a bourgeois family before joining the Merchant Marines in hopes of being accepted into the Naval Academy. Despite his fatherâ€™s wishes, Manet instead entered the studio of the painter Thomas Couture. Perhaps his most influential experience came while visiting Spain and the Netherlands, where he saw the works of Diego Velazquez, Francisco De Goya, and Frans Hals-these earlier painters influenced Manetâ€™s use of loose and abbreviated brushwork to convey form and light. In 1863, his work Le Dejeuner sur lâ€™Herbe was rejected from the official Salon and hung in the Salon de Refuses, where it drew criticism from both the general public and journalists. Despite this set back, Manet continued to explore his own way, with encouragement from his friend the poet Charles Baudelaire. Around this time, he began to frequent the Cafe Guerbois where he mingled with a number of young painters including Paul Cezanne, Claude Monet, and Pierre-Auguste Renoir. Though he suffered criticism early on, by the late 1870s his works were lauded both by the Salon and his peers. He died of complications from syphilis on April 30, 1883 in Paris, France. Today, the artistâ€™s works are in the collections of the Metropolitan Museum of Art in New York, the National Gallery of Art in Washington, D.C., the Musee dâ€™Orsay in Paris, and the Alte Nationalgalerie in Berlin, among others. PROVENANCE: Private estate (Perugia, Italy)

All lots that do not carry established documented provenance nor any past record of auction history record are described in the catalog as attributed.

By [Artist Name]: In our opinion, the work is by the artist.

Attributed to [Artist Name]: In our opinion, the work may be ascribed to the artist on the basis of style, but there may be some question as to actual authorship.

In the manner of [Artist Name]: In our opinion, the work was executed by an unknown hand, but was designed deliberately to emulate the style of the artist.

After [Artist Name]: In our opinion, the work was executed by an unknown hand, but is a deliberate copy of a known work by the artist.

Circle of [Artist Name]: In our opinion, a work of the period of the artist showing his influence, closely associated with the artist but not necessarily his pupil.

Follower of [Artist Name]: In our opinion, a work by a pupil or a follower of the artist (not necessarily a pupil).

American, 19th century: In our opinion, this work was executed by an unknown hand, and can only be identified by origin (i.e., region, period).

Bears signature: In our opinion, the signature on the artwork may be spurious.

4,135 Followers
Get notifications from your favorite auctioneers.
As Seen On
Shop With Confidence
Since 2002, LiveAuctioneers has made exceptional items available for safe purchase in secure online auctions.
Popular Searches
Artists & Creators
Brands
Style Periods
Origins
Company
Winning
Selling
Â© 2002-2020 LiveAuctioneers. All Rights Reserved.Cookie PolicyTerms & ConditionsPrivacy Policy
This site is protected by reCAPTCHA and the Google Terms of Service and Privacy Policy apply.
BACK TO TOP