Sigmund Freud ALS In English During "Freudmania" in the 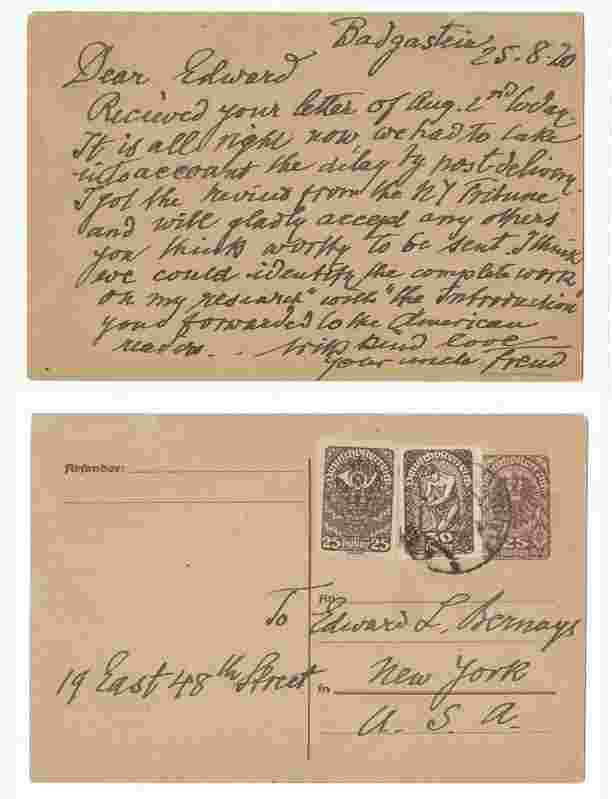 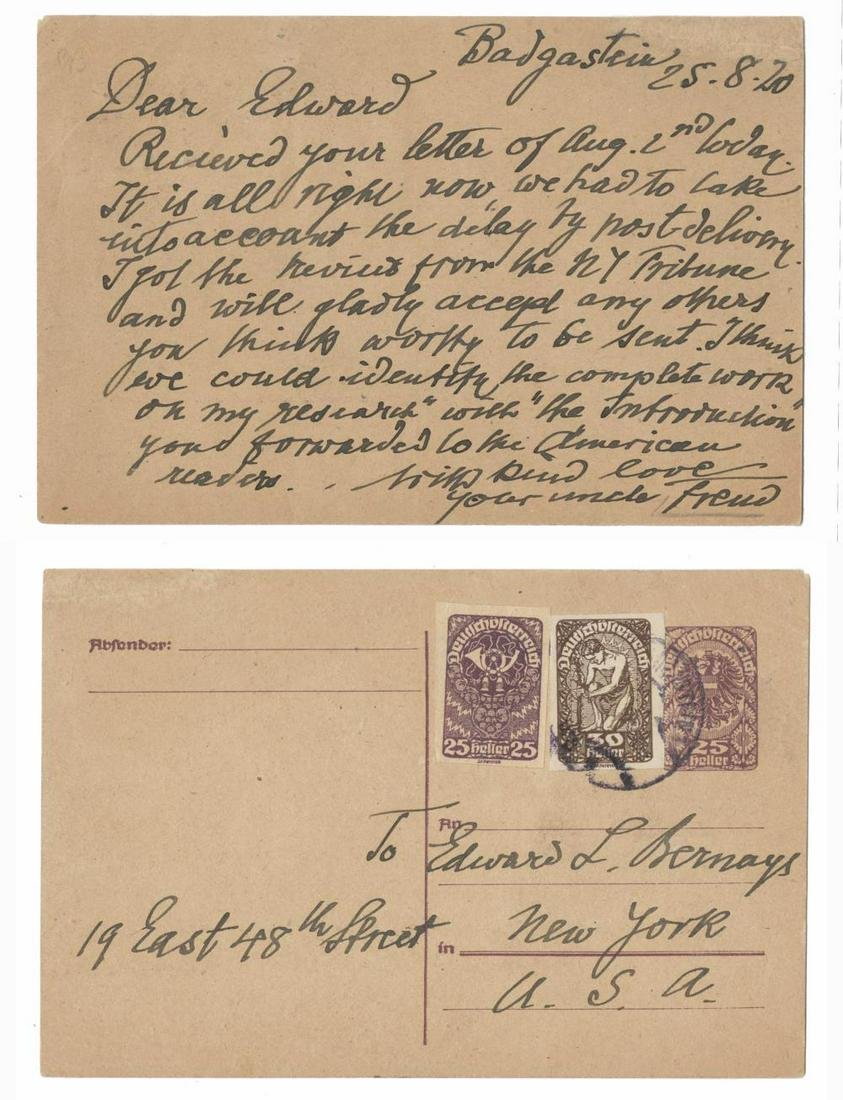 Sigmund Freud ALS During "Freudmania", to Bernays "The Father of Spin"

A superb important letter, with a fantastic association. Edward Bernays was an Austrian-American pioneer in the field of public relations and propaganda, referred to in his obituary as "the father of public relations", and "the father of spin" who created campaigns for most anything. Bernays was named one of the 100 most influential Americans of the 20th century by Life. In addition, Sigmund Freud was Bernay's uncle as Freud's sister was his mother and his father's sister was Freud's wife. The letter is shown in full below:


Received your letter of Aug 2nd today. It is all right now, we had to take into account the delay by post delivery. I got the revised from the NY Tribume and will gladly accept any others you think worthy to be sent. I think we could identify the complete work on my research with "the Introduction" you forward to the American readers.

Bernay's many books gained special attention as early efforts to define and theorize the field of public relations. Although Bernays operated in the realm of propaganda and PR, and Freud in psychoanalysis, the reality is they both employed psychology when Bernays described the masses as irrational and subject to herd instinct—and outlined how skilled practitioners could use crowd psychology and psychoanalysis to control them in desirable ways.

In 1920, Bernays organized the publication of Freud's Introductory Lectures on Psychoanalysis in the US, sending royalty money back to his uncle in Vienna. Freud turned down further offers at promotion, such as a possible lecture tour and an invitation to write 3,000-word newspaper columns, for $1,000 each, on topics such as "The Wife's Mental Place in the Home" and "What a Child Thinks About." "When a person would first meet Bernays," says Scott Cutlip, "it would not be long until Uncle Sigmund would be brought into the conversation. His relationship with Freud was always in the forefront of his thinking and his counseling." According to Irwin Ross, another writer, "Bernays liked to think of himself as a kind of psychoanalyst to troubled corporations." In addition to publicizing Freud's ideas, Bernays used his association with Freud to establish his own reputation as a thinker and theorist.

The Freud book which Bernays working to publish was original published in German as Vorlesungen zur Einführung in die Psychoanalyse (Introduction to Psychoanalysis or Introductory Lectures on Psycho-Analysis) as a set of lectures given by Sigmund Freud in 1915-17 (published 1916-17). The 28 lectures offer an elementary stock-taking of his views of the unconscious, dreams, and the theory of neuroses at the time of writing, as well as offering some new technical material to the more advanced reader.

Sigmund Freud ALS In English During "Freudmania" in the