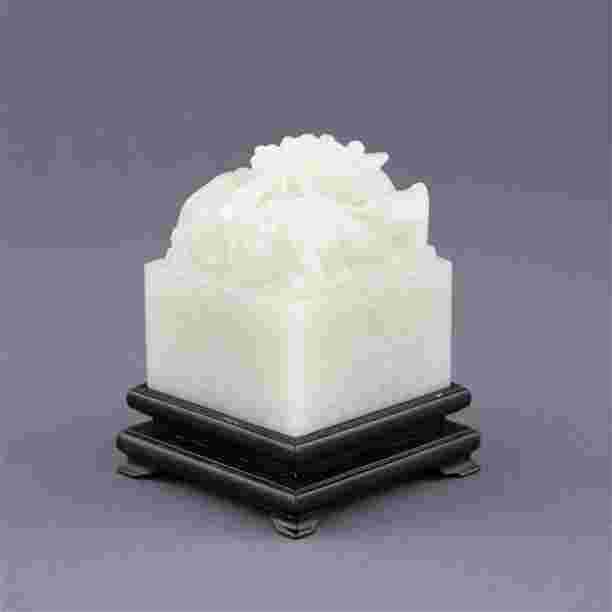 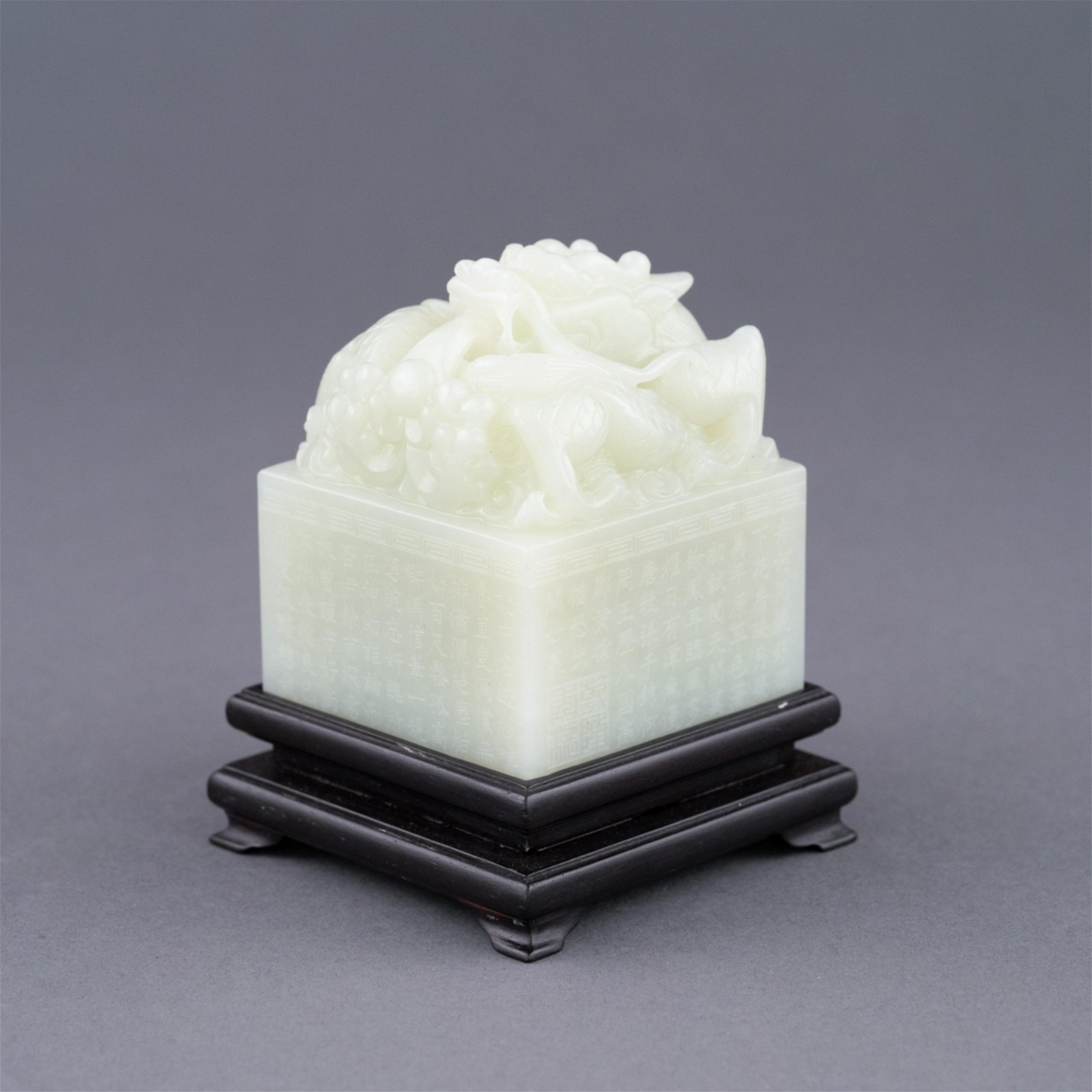 Extraordinary, Chinese 17th Century Qing Dynasty, Natural White jade carved dragon seal on stand. The Finest Chinese Jade carved imperial dragon seal, masterfully carving Jade seal with dragon shaped handgrip atop cuboid slab. Protruding from the stamp column is the dominating figure of a headed dragon striding the seal. Sculpture of Dragon is centered on the seal block with evenly spaced gaps all the way around allowing for the users fingers to comfortably rest on the edges. With slight short thick square base, meander band at the top and Chinese calligraphy encircling the characters incised in the bottom Reign mark. Dragon is the symbol of the Emperor, the Son of Heaven, eternity, Yang and Yin, male vigor and fecundity, the Li-shui wave pattern which is known to be the abode of dragons. The dragon is also the most important of the four super natural creatures in Chinese mythology, ranked with the Phoenix, the Qilin, and the Tortoise. The dragon is also the symbol of the month March, of Spring and of rebirth and fertility for it brings the rain bearing clouds of spring. When shown with the heavenly pearl, sometimes ball, it represents thunder and the storm. Emblem of vigilance and safety, and frequently associated with the idea of joy. Elegancy come with tall hardwood stand carved with scrolling ruyi, Auspicious motif and terminating into four ruyi feet. The Elaborately carved hardwood frame perfectly accentuates this work of art. Excellent craftsmanship is evident in the fine details. Nephrite has mottled appearance with scattered inclusions along with a beautiful transparent milk-white tone. The Jade is perfectly polished and feels smooth to the touch. Translucent milk-white appearance. The Expert workmanship is the absolute highlight of this gorgeous nephrite jade screen, a portion of this natural jade is considered quite rare. Notes:Jade is precious because it is rare, and because the quality of jade corresponds to virtue. It relates to such virtues as benevolence, wisdom, righteousness, propriety, loyalty, and trustworthiness, and it also corresponds to the ways of the heaven and earth Jade is mild and gentle, just like a benevolence. Jade has a fine texture yet it is solid, just like a wise person; with a careful, meticulous and thorough way of handling things. Though jade has edges and corners, it is not sharp and will not hurt others, resembling a sense of justice and uprightness. When the jade is hung, it symbolizes polite restraint and prudence. When it is struck, it releases a clear and spirited sound like music. Though jade is beautiful, blemishes do not obscure its merits. Just like loyalty, it is without bias and without the need to conceal. In addition, the color of jade can be seen from all angles. Just like trustworthiness, a person's behavior is consistent with words. Even in a darkened room, a person is trustworthy and does not cheat others. Jade is crystal like, glittering and translucent as a white rainbow, like the white clouds of heaven, which harmonize the heavens and correspond to heavenly principles. The spirit of the jade can be seen in the landscape, like â€˜when jade lies in a deep pool, it makes the river enchanting. When jade rests on the mountain, the grass becomes luxuriant.â€™ Wherever located, it is bound to have an effect, just like a noble demeanor can harmonize many things and benefit the whole region. People everywhere cherish jade, which is because people respect and admire virtue. The noble virtues are the manifestation of heavenly principles.”

Over all in EXCELLENT condition, with normal anomalies in nature, Normal consider ages and wears.
All lots are sold as is and where is. EDEN Fine antiques Galleries provides condition reports upon request to aide in your bidding decision. No statement regarding age, condition, kind, value, or quality of a lot, whether made orally at the auction or at any other time, or in writing in this catalog or elsewhere, shall be construed to be an express or implied warranty, representation, or assumption of liability. All sales are final, EDEN Fine antiques Galleries does not give refunds based on condition. EDEN Fine antiques Galleries does not perform any shipping or packing services. We do have a list of suggested shippers who gladly provide quotes prior to your bidding. Please visit our webpage for a list of recommended shippers.