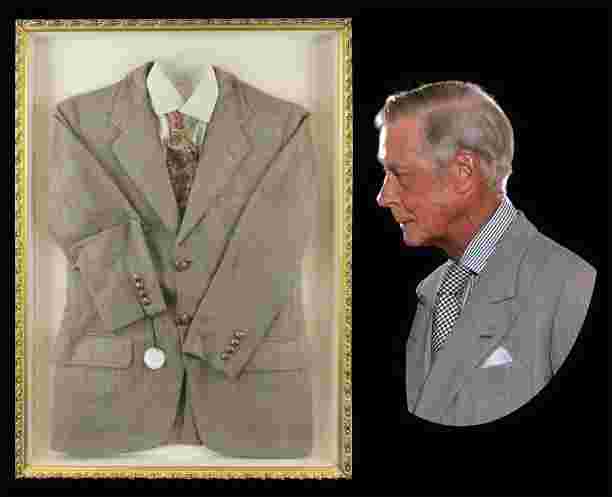 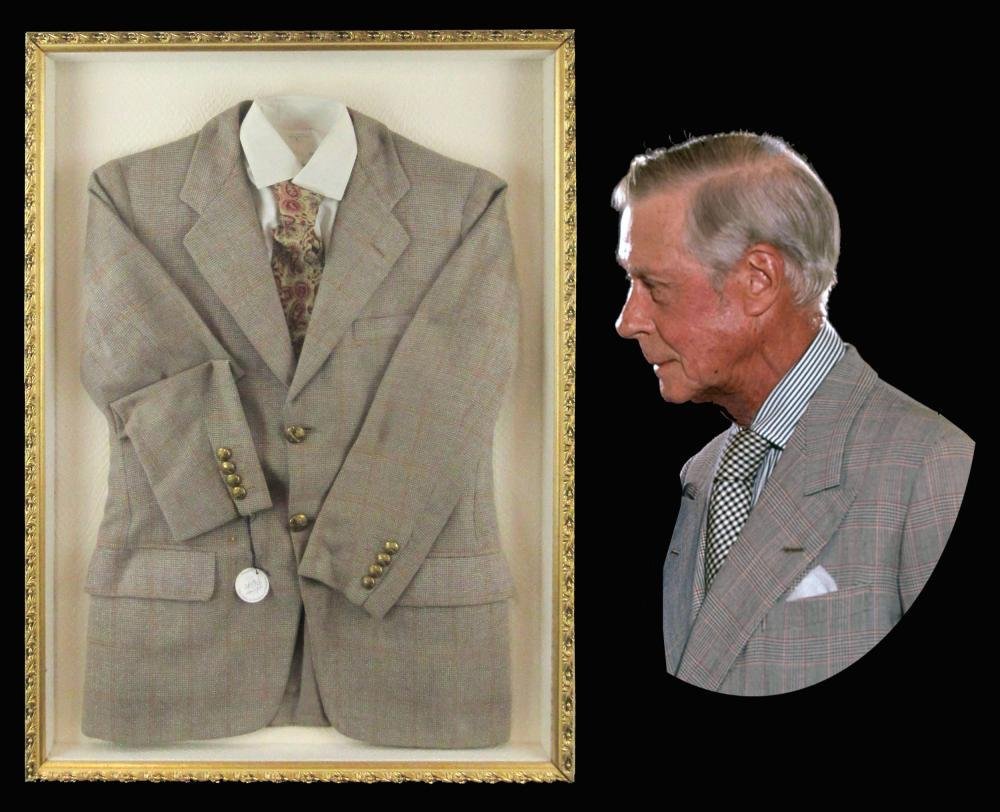 Edward, Duke of Windsor, Personally Worn Jacket, Dress Shirt & Tie, Ex-Sotheby's
A jacket, dress shirt, and tie personally owned and worn by Edward, Duke of Windsor (1894-1972), the former British monarch Edward VIII. The ensemble is artfully arranged and displayed in a quilted fabric-backed shadowbox and gilt frame behind glass. Expected wear, else in near fine condition. Not examined out of frame. Overall framed size 25.5" wide by 35" high by 2.625" deep. Provenance: Ex-Sotheby's, The Duke and Duchess of Windsor Sale (Sale 7000) September 11-19, 1997. This ensemble was part of Lot 2859, selling for $8,625 including buyer's premium. Ex-Estate of Jane Lublin.
Today, Edward is best known for sacrificing everything in order to marry the woman he loved: the American socialite Wallis Simpson (1896-1986). But during his lifetime, the Duke of Windsor was also celebrated as one of the world's most daring and elite fashion trendsetters. “I was in fact 'produced' as a leader of fashion, with the clothiers as my showmen and the world as my audience,” Edward recalled in "A Family Album" (London: Cassell, 1960).
The lot is comprised of:
- H. Harris single-breasted fine wool tweed jacket with Cottesmore Hunt brass-toned buttons. Measuring approximately 19.5" wide at the shoulders, and 29" from collar to hem. The original Sotheby's auction tag is pinned under the right jacket sleeve.

- Hawes & Curtis white cotton shirt, the collar tag bearing the company name and embroidered with an "E." The numbers "40793" and "19/00" in light blue thread appear to the right of the collar label.
- Hawes & Curtis paisley wool tie printed in scarlet and black on a pale yellow ground.
The Duke of Windsor wore the beige jacket and paisley tie while filming "A King's Story" in August 1964. The documentary released by Columbia Pictures in 1965 was based on Edward's memoir of the same name, "A King's Story: The Memoirs of H.R.H. the Duke of Windsor K.G." (London, Cassell, 1951.)
The Duke of Windsor's sartorial originality was apparent in the color, pattern, cut, mechanics, and accessorizing of his wardrobe. Edward's relatively small size (5'5") should have steered him away from wearing certain patterns and colors. Yet not only did the Duke of Windsor wear these same patterns and colors, he even audaciously combined them with other patterns including stripes and checks! Edward adopted idiosyncratic modes of dress, like wearing ascots under polo shirts and cuffing his trousers, and he prioritized comfort over convention, favoring zippers and elastic waistbands instead of cumbersome buttons. Somehow, the Duke of Windsor knew exactly what to wear on what occasion so that he could stand out in a crowd but not look ridiculous.
Edward's supremacy as an arbiter of bespoke men's fashion began as the Prince of Wales. He was one of the first British aristocrats to espouse the "dress soft" style, which entailed a looser fit and less restrictive tailoring. By dressing in the modern "British drape" or "London cut" style, Edward thus rejected Victorian and Edwardian fashion customs. Edward relied on the expertise of Dutch tailor Frederick Scholte between 1919-1959. Scholte worked on Savile Row and trained the clothiers Anderson & Sheppard, still in operation today. Scholte's mastery of the soft yet defined shoulder set the Duke of Windsor apart from his peers, as did Edward's insistence on using the best materials for his clothes and fastidiously caring for them. In a 1960 inventory, the Duke of Windsor counted over 70 suits--ranging from lounge to evening to formal--and 100 pairs of shoes in his wardrobe.
A full two of three pieces from this lot were designed by Hawes & Curtis, a luxury clothier first established in 1913. The company is still in business today with stores in the United Kingdom, Germany, and the United Arab Emirates. The brand held a royal warrant almost continuously between 1922, when Edward, the then Prince of Wales first granted it, to 1985, when the Duke of Edinburgh's fourth royal warrant expired.
This item comes with a Certificate from John Reznikoff, a premier authenticator for both major 3rd party authentication services, PSA and JSA (James Spence Authentications), as well as numerous auction houses.
WE PROVIDE IN-HOUSE SHIPPING WORLDWIDE!

1,661 Followers
Auction Curated By:
John Reznikoff
President
Get notifications from your favorite auctioneers.
As Seen On
Shop With Confidence
Since 2002, LiveAuctioneers has made exceptional items available for safe purchase in secure online auctions.
Popular Searches
Artists & Creators
Brands
Style Periods
Origins
Company
Winning
Selling
Â© 2002-2020 LiveAuctioneers. All Rights Reserved.Cookie PolicyTerms & ConditionsPrivacy Policy
This site is protected by reCAPTCHA and the Google Terms of Service and Privacy Policy apply.
BACK TO TOP