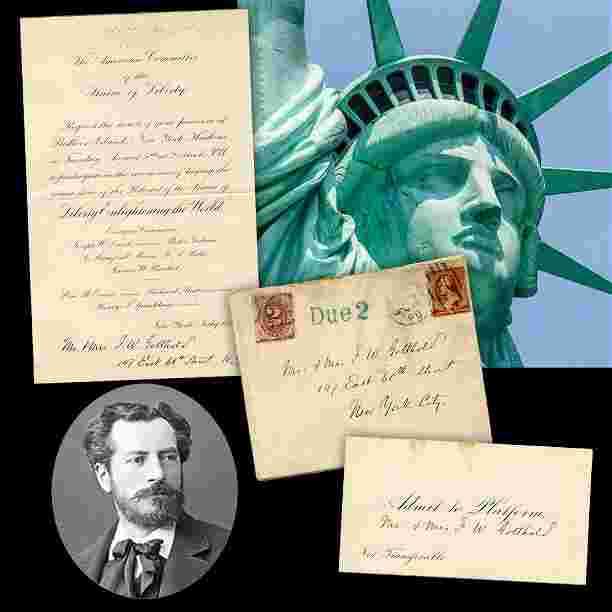 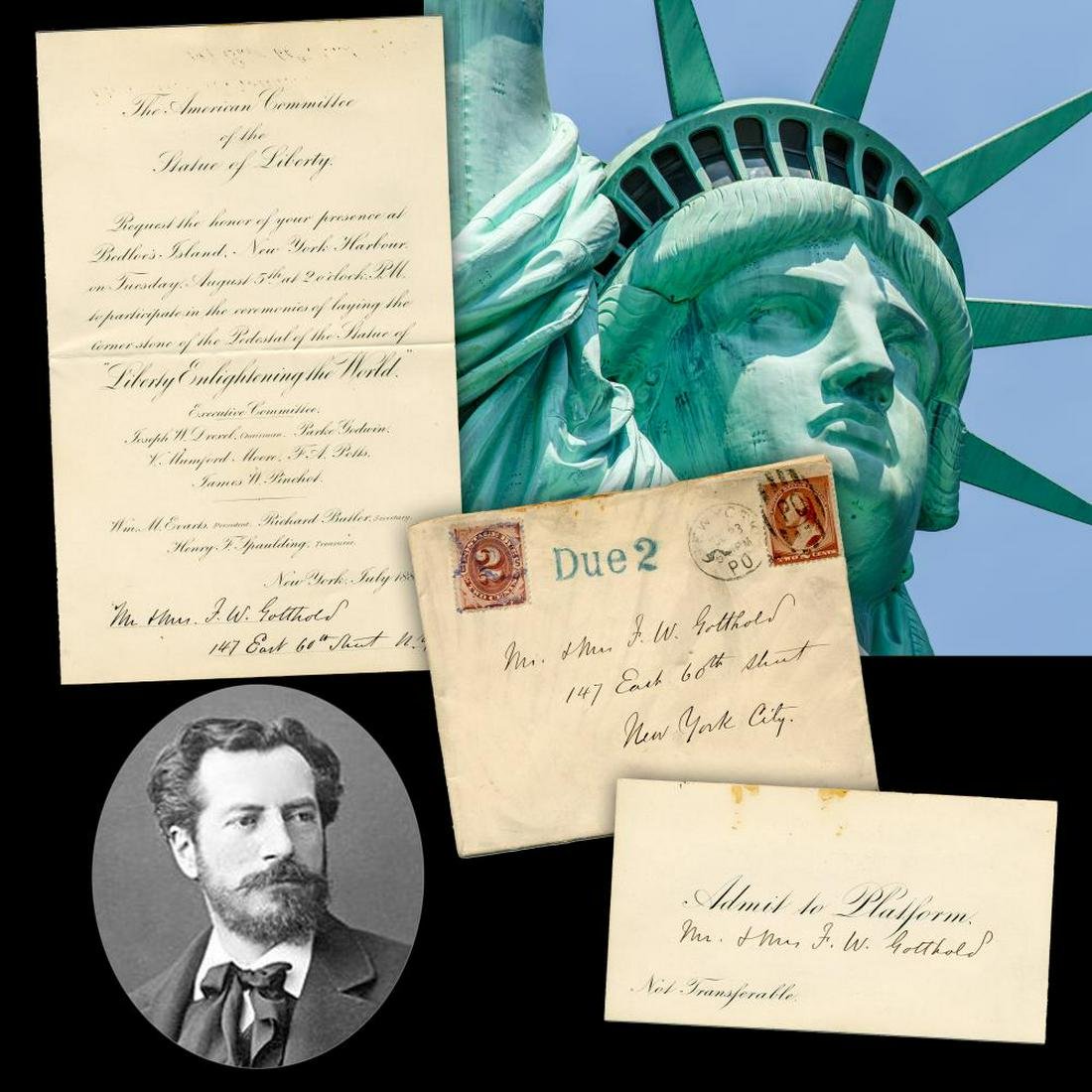 Three pieces of ephemera relating to the cornerstone laying ceremony of Frederic-Auguste Bartholdi's Statue of Liberty on Bedloe's Island in New York Harbor on August 5, 1884. The items are addressed to "Mr. + Mrs F.W. Gotthold" of New York City and include an invitation, a rare platform admission ticket, and the original transmittal envelope. All with minor mounting traces verso, else very good to near fine condition; individual condition issues will be described below. Ex Ray V. Denslow (see biography below.)

1. Invitation. The partly printed and partly handwritten invitation is on cream bifold paper and reads in part:

Request the honor of your presence at Bedloe's Island, New York Harbour on Tuesday, August 5th at 2 o'clock P.M. to participate in the ceremonies of laying the corner-stone of the Pedestal of the Statue of 'Liberty Enlightening the World'".

3. Envelope. The envelope postmarked in New York City on July 23, 1884 bears two 2 cent stamps including a brown George Washington. Some weathering and letter-opened at top.

The Statue of Liberty was designed by French artist Frederic-Auguste Bartholdi (1834-1904). The sculpture, a ceremonial gift from the French to the American people representing Columbia, arrived in pieces in New York Harbor in 1885. All the Americans had to do was get ready to receive the Statue, which entailed retrofitting old fortifications into a pedestal on Bedloe's Island.

The 6-ton granite block cornerstone was lowered into the northeast corner of the old fort's foundations on the afternoon of August 5, 1884. Approximately 1,500 attendees, one third of whom were French, braved the torrential rain squall that sprang up, soaking the festivities. Patriotic music was played, flags were waved, and a slew of meaningful objects were dumped into the cornerstone time capsule, including copies of the Declaration of Independence and Constitution, medals, newspapers, and calling cards.

Only about 50% of the required funds were in the bank at the time of the pedestal cornerstone laying ceremony, and the whole project was threatened. Thanks largely to newspaper magnate Joseph Pulitzer, who rallied the readership of his New York World, an additional $125,000 would soon be raised. The completed statue was inaugurated on October 28, 1886, only ten years later than forecasted!

Frederic-Auguste Bartholdi studied painting, sculpture, and architecture under well-known instructors like Viollet-le-Duc in Paris. Following his service in the Franco-Prussian War, Bartholdi became increasingly interested in sculpting monumental works celebrating resistance against oppression, and Enlightenment ideals like Freedom. Bartholdi later conceived of the design of the "Statue of Liberty Enlightening the World". The fundraising phase of this process would take years, and indeed long surpass the actual 100th anniversary of the United States. Yet once it was installed in 1886, the massive 151-ft tall copper-clad sculpture of a standing woman would fundamentally change the cityscape.

Ray V. Denslow (1885-1960), a fourth generation Freemason, and internationally renowned Masonic historian, having written over 20 full volumes and 62 booklets on Masonic subjects. He held extensive positions as a Freemason over his lifetime including Grand High Priest of the Grand Chapter R.A.M. of Missouri and as Grand Master of the Grand Lodge, A.F. & A.M. of Missouri. Perhaps his greatest national honor was that of serving as General Grand High Priest of the General Grand Chapter, Royal Arch Masons, from 1942-46. He was Grand Master of the Knights of the York Cross of Honor in 1949; Grand Sovereign of the Red Cross of Constantine in 1943; Grand Chancellor of the Grand College of Rites; Great Prior of the Chevaliers Bienfaisants de la Cité Sainte, U.S.A. in 1952; and Grand Abbot of the Society of Blue Friars at the time of his death. He held almost 100 honorary memberships in Masonic groups stretching from France to the Philippines.

1,661 Followers
Get notifications from your favorite auctioneers.
As Seen On
Shop With Confidence
Since 2002, LiveAuctioneers has made exceptional items available for safe purchase in secure online auctions.
Popular Searches
Artists & Creators
Brands
Style Periods
Origins
Company
Winning
Selling
Â© 2002-2020 LiveAuctioneers. All Rights Reserved.Cookie PolicyTerms & ConditionsPrivacy Policy
This site is protected by reCAPTCHA and the Google Terms of Service and Privacy Policy apply.
BACK TO TOP