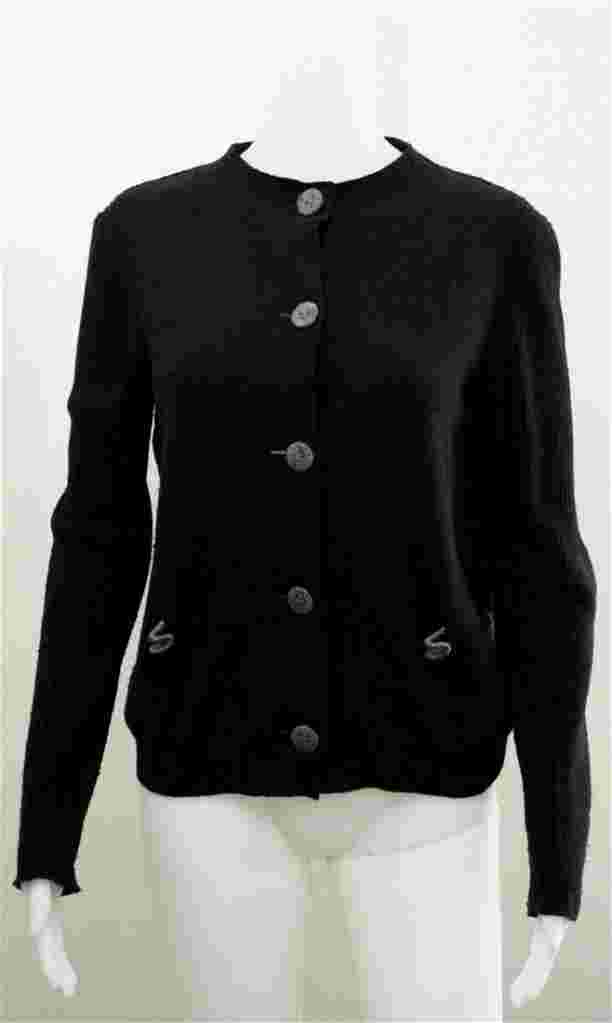 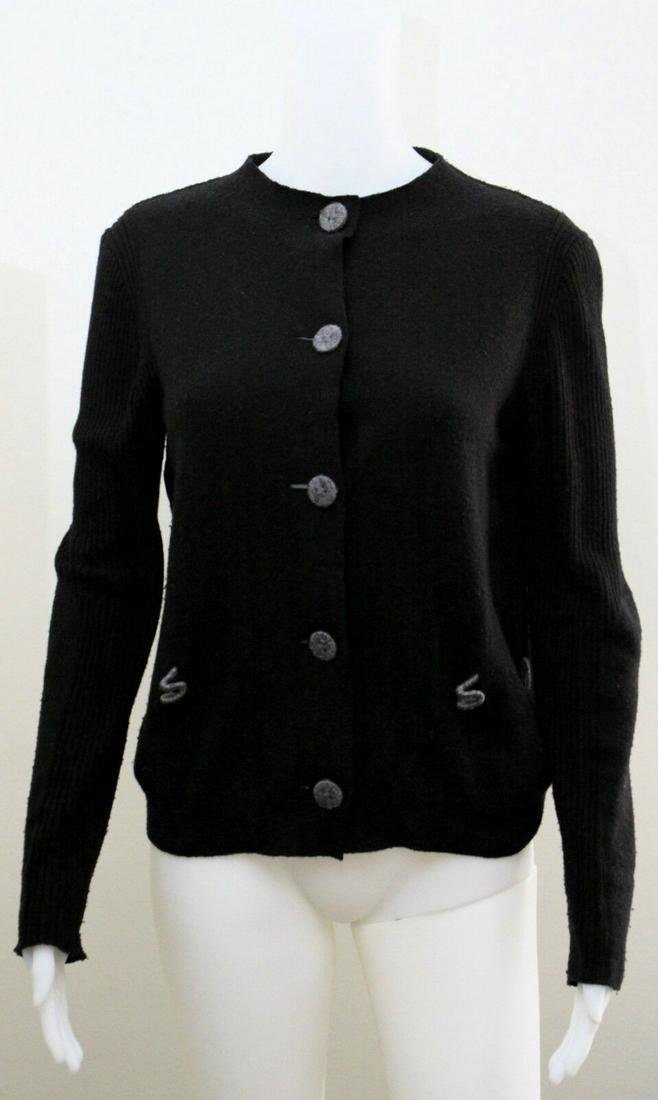 AUTHENTIC
L A N V I N
2007
VINTAGE
BLACK
CARDIGAN
STYLISH & UNIQUE
LENGTH - 23''
CHEST - 36-37''
SLEEVE - 23 1/2''
SHOULDER - 16 1/2''
100 % FLEECE WOOL
Lanvin made such beautiful clothes for her daughter that they began to attract the attention of a number of wealthy people who requested copies for their own children. Soon, Lanvin was making dresses for their mothers, and some of the most famous names in Europe were included in the clientele of her new boutique on the rue du Faubourg Saint-Honoré, Paris. 1909, Lanvin joined the Syndicat de la Couture, which marked her formal status as a couturière.
From 1923, the Lanvin empire included a dye factory in Nanterre. 1920s, Lanvin opened shops devoted to home decor, menswear, furs and lingerie, but her most significant expansion was the creation of Lanvin Parfums SA in 1924 and the introduction of her signaturefragrance Arpège in 1927, inspired by the sound of her daughter's practising her scales on the piano. A later perfume, "My Sin," is widely considered a unique fragrance, an animalic-aldehyde based on heliotrope.
One of the most influential designers of the 1920s and '30s, Jeanne Lanvin's skilful use of intricate trimmings, virtuoso embroideries and beaded decorations in clear, light, floral colors became a Lanvin trademark.
When Lanvin died in 1946, ownership of the firm was ceded to the designer's daughter, who shared management of the firm from 1942 with a cousin and then a fashion-industry expert. Because Marie-Blanche de Polignac was childless when she died in 1958, the ownership of the House of Lanvin went to a cousin, Yves Lanvin. (See Directors and Officers Since Jeanne Lanvin below.)
From mid-60's through to the takeover by L'Oreal, Lanvin was run by Bernard Lanvin. The export department was in the original factory in Nanterre where all the perfumes were made and bottled. The administrative Head Office was in Paris at 3, Rue de Tilsitt. In 1979 Lanvin bought it's independence from Squibb USA and a major PR promotional tour was arranged by Paris in the United States in the same year.
Since Britain's Midland Bank bought a stake in the company from the family in March 1989, the company has shuttled from here and there. The bank brought in Léon Bressler to revamp the firm's faded image. However, in February 1990, Midland backed out and sold Lanvin to Orcofi, a French holding company led by the Vuitton family. From Orcofi, 50% of the House of Lanvin was acquired by L'Oréal in 1994, 66% in 1995 and 100% in 1996. Under L'Oréal's diverse umbrella, an array of CEOs who circulate within the French fashion industry have directed the company.
In August 2001, Lanvin, the oldest fashion house still in operation, was taken private again by investor group Harmonie S.A., headed by Mrs. Shaw-Lan Wang, a Taiwanese media magnate. And, October 2001, Alber Elbaz was appointed the Lanvin artistic director for all activities, including interiors, and he has conducted his responsibilities in a highly personal, hands-on manner. In 2006, he introduced new packaging for the fashion house, featuring a forget-me-not flower color, Lanvin's favorite shade which she purportedly saw in a Fra Angelico fresco (Suzy Menkes, 2005.)In 2006, Lucas Ossendrijver was brought on to head the men's line which debuted to great success while strengthening Lanvin's brand.
While enjoying a revitalized reputation in luxury, Lanvin received mainstream press in the United States in May 2009 when Michelle Obama was photographed wearing a popular line of Lanvin's sneakers made of suede, with grosgrain ribbon laces and metallic pink toe caps while volunteering at a Washington, D.C. food bank. The sneakers were reported to have cost $540.
On December 4, 2009, Lanvin opened their first US boutique in Bal Harbour, Florida.
[edit]Lanvin For H&M
On September 2, 2010, it was announced by H&M that Lanvin would be their guest designer collaboration for the Winter 2010 collection. The collection would be available to view beginning November 4, 2010 at HM.com. The collection would then be available to buy in 200 stores worldwide, on November 20, with a first look sale the day before exclusively at the H&M store in Las Vegas.
[edit]Retail Presence
Lanvin Boutiques are located in Amman, Ankara, Athens, Bal Harbour, Beirut, Beverly Hills, Bologna, Casablanca, Dalian, Doha, Dubai, Ekaterinburg, Geneva, Hong Kong,Jakarta, Jeddah, Kaohsiung, Kuala Lumpur, Las Vegas, London, Manama, Marbella, Milan, Moscow, Monte Carlo, New York City, Paris, Rome, Samara, Saint Tropez, Salmiya,Shanghai, Singapore, Taipei, Tokyo, Toronto and Warsaw.
The Las Vegas (men's and women's) and Bal Harbour (women's only) boutiques were the only ones in the United States. In July 2010, Lanvin opened a boutique on New York City's Madison Avenue.
Lanvin's biggest wholesale customer in the United States is Barneys New York.
A new Lanvin boutique opened in New Delhi in April 2011.
A new Lanvin boutique is set to open in Beverly Hills at Two Rodeo Drive and is over 6,000 square feet (560 m2) with an underground VIP entrance. In 2012 Lanvin will be opening their sixth US location on Chicago's Oak Street mid 2012.

GOOD CONDITION.
PLEASE, CHECK OUR OTHER VINTAGE DESIGNER'S UNIQUE COLLECTIONS.
ALL OUR ITEMS ARE IN GREAT CONDITION.

32,433 Followers
Get notifications from your favorite auctioneers.
As Seen On
Shop With Confidence
Since 2002, LiveAuctioneers has made exceptional items available for safe purchase in secure online auctions.
Popular Searches
Artists & Creators
Brands
Style Periods
Origins
Company
Winning
Selling
Â© 2002-2020 LiveAuctioneers. All Rights Reserved.Cookie PolicyTerms & ConditionsPrivacy Policy
This site is protected by reCAPTCHA and the Google Terms of Service and Privacy Policy apply.
BACK TO TOP