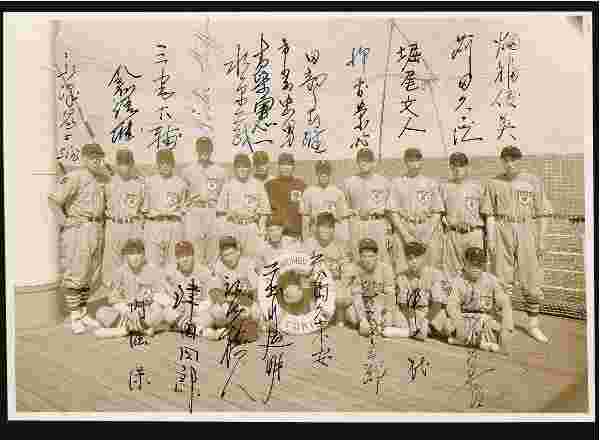 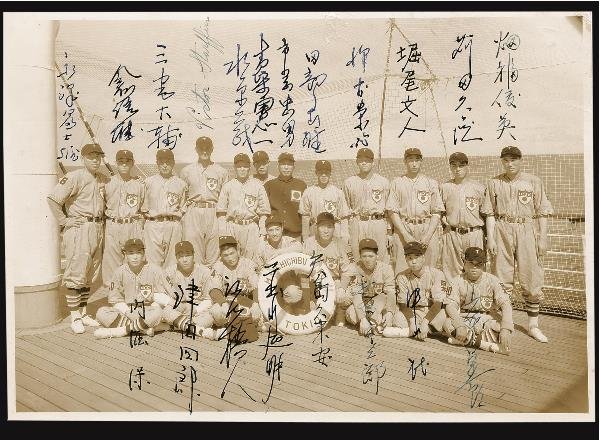 1935 Dai Nippon Tokyo Yakyu Club Autographed Team Photo
Just a few weeks after the All Nippon team dissolved following the historic Babe Ruth tour of 1934, about half of the team members were recruited to form Japan's longest standing professional team, originally called the Dai Nippon Tokyo Yakyu Kurabu (Great Japan Tokyo Baseball Club). With no other organized pro teams to play against in Japan, the Dai Nippon team had only one place where they could find worthy competition—the USA. Sponsored by Japan's Yomiuri Shinbun, the Dai Nippon squad set out on an extensive barnstorming tour against American and Hawaiian pro and amateur teams. Needless to say, this was the first ever tour of the U.S. by a Japanese professional baseball team.The team departed from Yokohama harbor on February 14, 1935, on the Chichibu Maru, where this picture was taken, and arrived in San Francisco on February 27. Although the exact record for the tour is still being researched, according to one expert the team amassed a record of 74 wins and 34 losses against PCL, semi-pro, Nisei, and town clubs. Some of their top wins were against the PCL's Sacramento Solons and the San Francisco Seals, although generally they were not facing the top players as these were essentially spring training games for the PCL squads. Along the way, the team adopted a name which was alleged to have been suggested by Japan's old baseball friend, Lefty O'Doul: the "Giants." The name would stick, and today's leading Japanese franchise is still called the Yomiuri Giants.The Giants squad would go on to be the foundation team for the Nippon Professional Baseball League, which began competition in 1936. In the postwar period, the NPBL later was reorganized into the Central and Pacific Leagues, who carry on Japan's pro baseball tradition today. Among the twenty autographs are eight by Japanese Hall of Famers, including the two most sought after Japanese baseball signatures, Eiji Sawamura and Victor Starffin. Sawamura, the team's ace, had just turned 18 at the time and is best known for having pitched in a 1-0 loss to the Babe Ruth All-American team just three months earlier. During the game, Sawamura fanned Gehringer, Ruth, Gehrig, and Foxx in succession. Russian-born Starffin went to Japanese schools and as a pro became Japan's first 300-game winner. Sadly, five of the 18 Japanese players pictured died in World War II, including Sawamura, who perished at age 27 and Takeo Tabe, who is reputed to have stolen 105 bases on the 1935 tour. The other Hall of Famers in the photo are Nobuaki Nidegawa, Daisuke Miyake, Shigeru Mizuhara, Tadao Ichioka, Takeo Tabe, and Hisanori Karita. Photo measures 7 3/4" by 5 1/4". Signatures average 8-9/10. Photo shows a few minor creases, otherwise appears in excellent condition. LOAs from PSA/DNA and JSA.