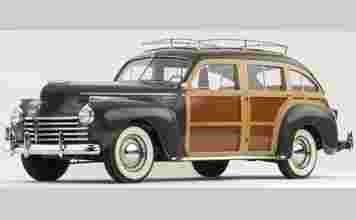 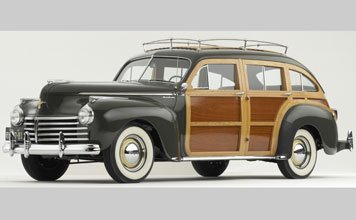 Conceived in 1939, the Town & Country Estate Wagon represented Chrysler's desire to create an entirely new car that was both luxurious and dramatic. It had to be elegant enough for city and chauffeur driving, but utilitarian enough for country living. David Wallace, Chrysler's president, was the driving force behind the creation of the unique Town & Country Estate Wagon design. He wanted a wood-bodied car that would have the same basic lines as the steel-bodied sedans, yet with greater refinement, quality, and panache. The cars were constructed utilizing two different types of woods, including the structural wood of white ash with contrasting panels in a rich Honduran mahogany.

By 1941, the evolution of the Town & Country had blossomed into the streamlined and beautifully designed Wagon as presented here. Built for a limited time only – production halted with the onset of World War II – the Town & Country was a rare sight on the street, and remains arguably the most attractive, rare, and desirable prewar wood-based vehicles ever produced. All told, in 1941, only 997 of these hand built masterpieces were produced. Of these, 797 were nine-passenger cars and 200 were six-passenger cars. According to the Town & Country Registry, only 17 nine passenger examples are known to exist. Of these none are known to be in better condition than the one pictured here.

The 1941 Chrysler Town & Country Barrel Back Station Wagon on offer is a simply outstanding nine-passenger example that has resided in the collection of the vendor for over 15 years. Finished in Polo Green and trimmed in tan leather, these colors, in combination with the white ash and Honduran mahogany wood, give the Town & Country a very attractive and stately appearance. A highly optioned example, the Chrysler comes with wide whitewall tires, a radio, a heater, a clock, a roof rack and the very rare musical electric horns that play "The Campbells Are Coming, Ho-Ro, Ho-Ro!" This was an option offered promoting the Highlander cloth interior trim.

The comprehensive, full mechanical and cosmetic show quality restoration took eight years to complete. Robert Anzalone form Manchester, Michigan, was responsible for the lion's share of the restoration with the exception of the woodwork, which was completely redone by Tom and Dave Henderson of San Diego, California. The interior was upholstered by Jim Roll of New Philadelphia, Ohio. Upon completion, the Chrysler was campaigned at several prestigious concours events where it earned a myriad of accolades, which included several best in class awards.

The quality and charm of this Town & Country was such that the AACA selected it to appear on their official Christmas card a few years ago. As a result the car was the subject of a painting by Angela Trotta Thomas – a full-size print of which is being included in this sale. Also included is a folio containing photos and documentation from the restoration, and a copy of a dealer-training movie from 1941. In addition to all these extras, the Chrysler comes complete with all its manuals, a brochure from 1941, and the original owner documentation from Chrysler.

Beautifully finished, meticulously restored, impressively optioned and highly correct, this nine-passenger Town & Country presents a rare opportunity for the serious collector to acquire one of the most unique and luxurious wood-bodied station wagons ever produced.