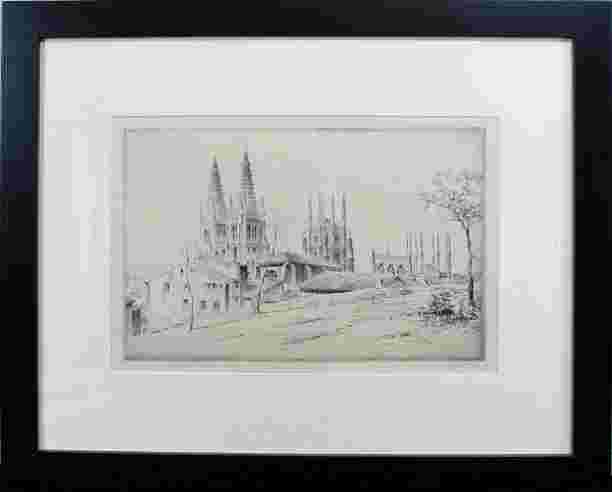 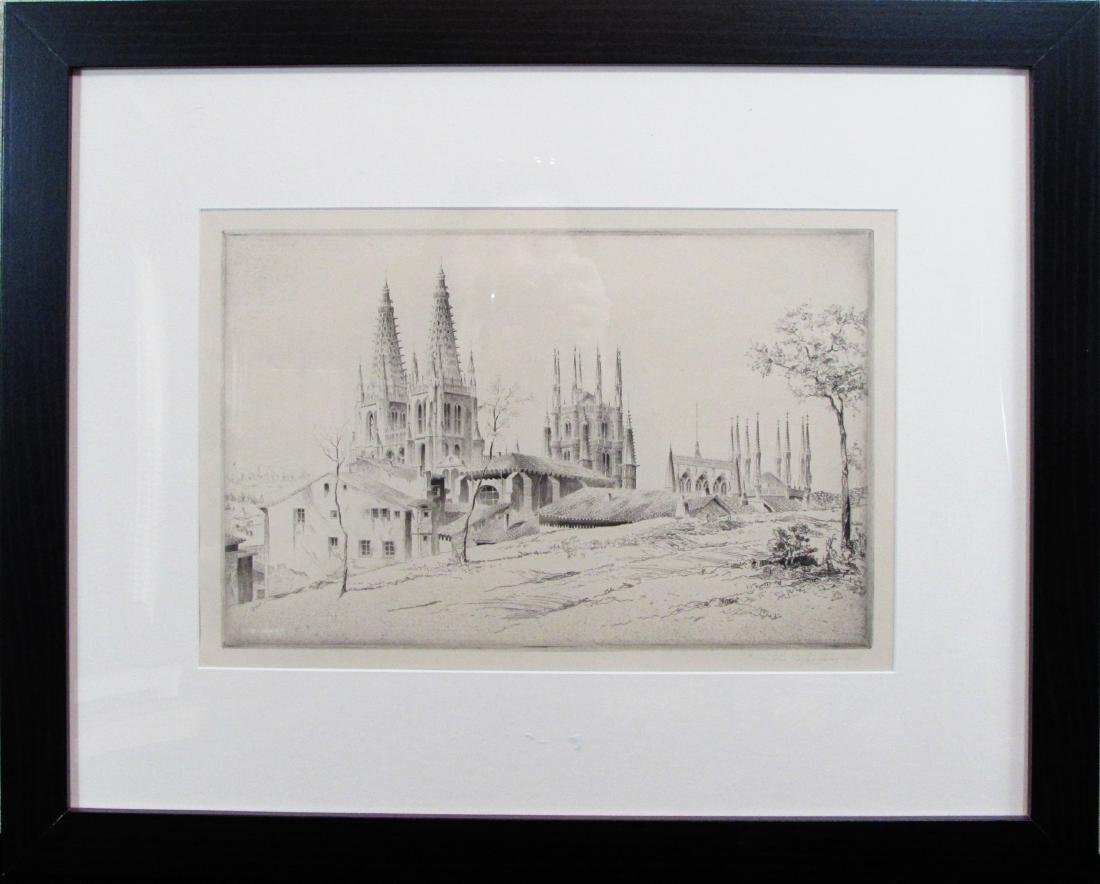 This original etching by Prairie Print Maker, John Taylor Arms is titled "Bougis" and is undated. The image measures 8.5" x 12.75" and is signed by the artist in the lower right corner. This piece is in good condition. Winning bids are packaged and shipped by UPS. Shipping estimates are available upon request. John Taylor Arms was, without question, one of the most respected American printmakers in the first half of the 20th Century. His etchings are in most of the major print collections in the United States and Europe. Additionally, Arms' involvement in organized efforts to promote printmaking includes serving as president of the Society of American Etchers and publishing the Handbook of Print Making and Print Makers in 1934. Winning bids are packaged and shipped by UPS. Shipping estimates are available upon request.
The most distinctive characteristic of an etching by John Taylor Arms is the exquisitely fine detail he developed. In many cases, a magnifying glass is needed to adequately appreciate the artist's work. Of special note are his depictions of Gothic architecture from Europe. Both Birger Sandzen and his son-in-law, Charles Pelham Greenough, were captivated by Arms' etchings, and this exhibition features thirty-four of the finest examples from their respective collections.
John Taylor Arms was born in Washington, D.C. in 1887. His family of businessmen, clergymen and teachers descended from a knitter of stockings who settled in Massachusetts in the seventeenth century.
In 1907, upon graduation from Lawrenceville School in Washington, D.C., Arms transferred to the Massachusetts Institute of Technology to study architecture. He received a Master of Science degree in 1912 and that year joined the firm of Carrere and Hastings in New York as a draftsman. He stayed with the firm for two years, after which he went into partnership with Cameron Clark, a well-known designer of houses in the Colonial Revival style. Arms soon tired of the day-to-day paperwork routine of his profession that did not satisfy his need for creative expression. He began spending evening hours on drawings he was not able to do at the office.
In 1913, Arms married Dorothy Frothingham Noyes. She gave him a small etching kit for Christmas which brought about his first print in 1914, titled Sunlight and Shadow.
In 1916 he dissolved his partnership with Clark and joined the Navy as a navigational officer on convoy duty during World War 1. Upon discharge in 1919 he decided to make etching his life's work.
The romance and nostalgia for old buildings and churches drew Arms to Gothic architecture imagery. He developed a plan to record the major Gothic churches in prints. During the 1920s, he began three of his most important series of etchings: The French Churches, The Spanish Churches, and The Italian Series. Arms continued to travel in Europe in the 1930s. He and his wife were particularly fond of Venice, with its intricate buildings and bridges combining Gothic and Byzantine architecture.
Toward the end of the decade, the Arms' found a new home-away-from-home in England. There he made many etchings of the small village churches until 1937. In the late thirties and during World War II, when travel in Europe became difficult, Arms and his family traveled to Mexico. He studied and drew Pre-Columbian ruins and Spanish Baroque architecture with his customary attention to detail and local color.
Arms developed his etchings from drawings made on location. After he had settled into a location, he would select a spot with a view of the subject he found satisfying and, perched on his camp stool, would spend ten days to two weeks on one drawing. These drawings were used as preparatory plans, with details added later, sometimes with the use of photographs. To begin an etching, he used the main areas of his drawings to trace an outline on a grounded etching plate. The transferred lines appeared as distinct red markings and served as a guide when he began to draw with the etching needle on the plate.
Arms often used ordinary sewing needles set in wooden handles to draw through the ground, exposing the plate surface. Once the image was satisfactory, he would print an edition of prints from the plate. Occasionally he used a magnifying glass to draw the closely packed dots and lines that suggest tonal values of sunlight and shadow on stone. The most difficult prints to make were the miniature images, with their extreme detail.
Henry Noyes Arms, the son of John Taylor Arms, characterized his father as a man who felt he had been "born to draw Gothic architecture." Arms wanted those who saw his prints to have the same emotional experience he enjoyed in the presence of the great cathedrals and other imagery he represented.

322 Followers
Get notifications from your favorite auctioneers.
As Seen On
Shop With Confidence
Since 2002, LiveAuctioneers has made exceptional items available for safe purchase in secure online auctions.
Popular Searches
Artists & Creators
Brands
Style Periods
Origins
Company
Winning
Selling
Â© 2002-2020 LiveAuctioneers. All Rights Reserved.Cookie PolicyTerms & ConditionsPrivacy Policy
This site is protected by reCAPTCHA and the Google Terms of Service and Privacy Policy apply.
BACK TO TOP