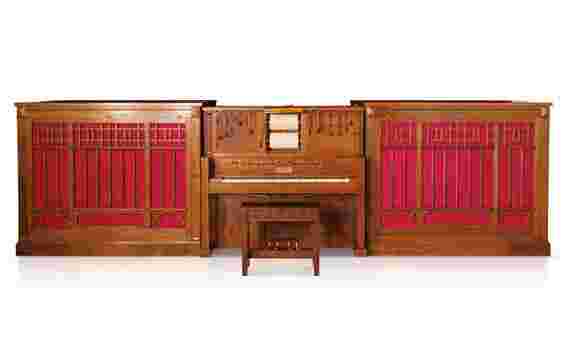 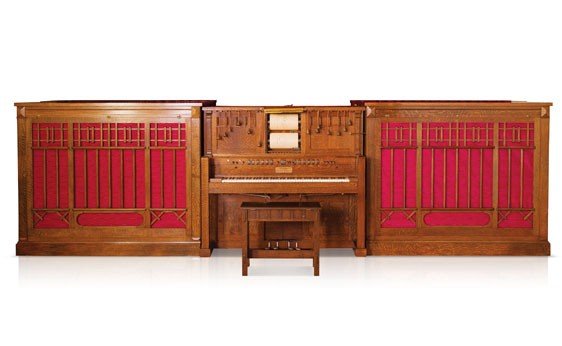 Photoplayers were elaborate sound effects machines made for accompanying silent movies in the 1910s and 1920s. They include piano, organ pipes and reeds, percussion and effects like horses' hooves, pistol shots, siren, trolley bell, tambourine, klaxon horn and many others. They could be played by a skilled musician or automatically by the operator using ordinary 88-note piano rolls and adding the sound effects by pushing buttons, tapping on pedals and tugging on leather cords. Two roll mechanisms allowed the operator to switch rapidly from one type of music to another, to coordinate the music with the action on the screen. A skilled operator today can put on quite a show, even without a silent movie! And, of course, the repertoire of 88-note rolls is virtually endless.

The most popular brand of photoplayer was the American Fotoplayer, and the Style 45 was the largest of its regular models. Photoplayers have a very low survival rate, because most were worn out from heavy use, and then became obsolete almost overnight when sound movies or "talkies" replaced silent films in the late 1920s. This example was originally installed in the Colonial Theatre in Ellensburg, Washington and has its original blower and vacuum units. It contains a piano, 244 pipes, 195 reeds, xylophone, orchestra bells and about two dozen drums, traps and sound effects. It still plays well after an older professional restoration.

It is accompanied by a matching roll cabinet and over 200 rolls, some of which are original "Picturolls" made for the Fotoplayer and feature music specially arranged for chase scenes, heavy drama, romantic scenes and the like. Thousands of additional 88-note player piano rolls of all types of music are easily available from many sources. There are only three Style 45 instruments known to exist. This will certainly be a showpiece in the collection of its next owner.

1,670 Followers
Get notifications from your favorite auctioneers.
As Seen On
Shop With Confidence
Since 2002, LiveAuctioneers has made exceptional items available for safe purchase in secure online auctions.
Popular Searches
Artists & Creators
Brands
Style Periods
Origins
Company
Winning
Selling
© 2002-2020 LiveAuctioneers. All Rights Reserved.Cookie PolicyTerms & ConditionsPrivacy Policy
This site is protected by reCAPTCHA and the Google Terms of Service and Privacy Policy apply.
BACK TO TOP